To find out more about activities in the local area and places of interest to visit, please read below: Dartmoor or Exmoor: Discover the wild moors, home of Prehistoric remains and inspiration for the Sherlock Holmes story ‘The Hound of the Baskervilles’. Accompanied Excursions into Cornwall can be arranged. Quaint harbours and picturesque villages await.

Minack Theatre is an impressive theatre carved into the cliff above Porthcurno and has one of the most stunning views in Cornwall.

St. Ives is an old fishing port and long-time haven for artists. It is home to the Tate Modern Gallery, and the meandering streets are full of shops, galleries and restaurants. Padstow has been made famous by the celebrity Chef Rick Stein and has a buzzy atmosphere.

Port Isaac is a tiny harbour village, which is the setting for the TV series 'Doc Martin'.

Tintagel is a place shrouded in myths and legends, famous for its connections to King Arthur and his Knights of the Round Table. Remains of a 13th century castle and the Old Post Office, which dates back 600 years, are just part of the local attractions to this small town.

Eden Project - Botanical Gardens in Boldeva. Inside the two biomes are plants that are collected from many diverse climates and environments. The project is located in a reclaimed China clay pit, three miles from the town of St. Austell.

Charleston Shipwreck and Heritage Centre is a historical museum relating to the port of Charlestown. It houses a gallery of shipwrecks including the famous RMS Titanic and HMS Victory.

Plymouth is a Maritime City with the historic Barbican area steeped in history.

Dartmouth is a beautiful town set on the western bank of the estuary of the River Dart, with a long narrow tidal ria that runs inland as far as Totnes. It has charming historic streets, scenic river location and is great for restaurants and shopping. Guided Public Tours of Britannia Royal Naval College are available throughout the year. Totnes is a market town at the head of the estuary of the River Dart, within the South Devon Area of Outstanding Natural Beauty. Its first castle was built in 907. By the twelfth century, it was already an important market town. It is a thriving centre for music, art, theatre and natural health, including a sizeable alternative and “New Age” community and is known as a place where one can live a bohemian lifestyle.

Powderham Castle is a magnificent manor near Exeter, Devon.

Exeter was the most south westerly fortified town in Roman Britain and the city is located on the River Exe. The City Walls surround its centre and Gothic Cathedral. Exeter Castle, a Norman landmark, overlooks Northernhay and Rougemont Gardens. It is a beautiful city with vaulted, medieval Underground Passages, the Royal Albert Memorial Museum and Art Gallery and the Custom House. The latter of which is located on The Quayside and is one of the most attractive areas of the city, popular with locals and visitors alike for its fascinating history, interesting architecture, and lively pubs and restaurants. 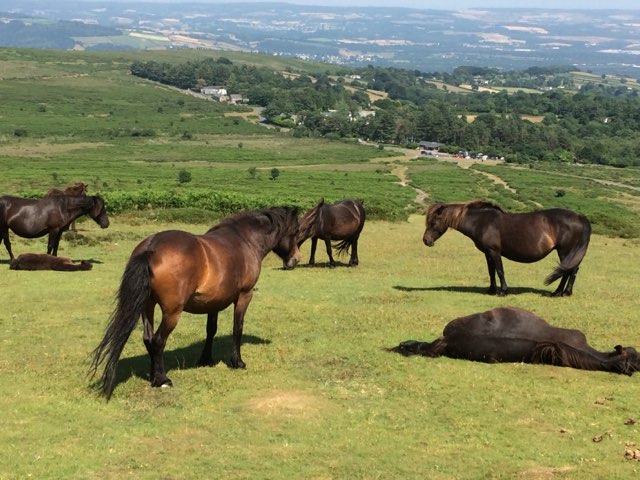 Dartmoor National Park is the inspiration behind Conan Doyle's epic Sherlock Holmes story The Hound of the Baskervilles. Haytor also known as Haytor Rocks, Hay Tor or occasionally Hey Tor, is a granite tor on the eastern edge of Dartmoor. Widecombe in the Moor is a village on Dartmoor National Park; its church is known as the Cathedral of the Moors on account of its tall spire and its size relative to the small population that it serves.

Bath in Somerset is a UNESCO World Heritage site, a beautiful Roman city with Georgian architecture. The Royal Crescent is an iconic British image along with the splendid Roman Baths.